inside Mosul: how did extremists take over one of iraq’s biggest cities in just five days?

From the first suicide bombings to an attack on the next province, it has only taken Sunni Muslim extremists five days to gain control of one of Iraq’s biggest cities and its surrounds. How did it happen? NIQASH spoke with the governor of the province as well as eyewitnesses inside Mosul.

It only took five days for the Sunni Muslim extremist organization known as the Islamic State of Iraq and Syria, or ISIS, to occupy the city of Mosul, capital of the province of Ninawa and one of the biggest cities in Iraq, around 395 km north of Baghdad. The reason that the group, known as Daash in Arabic and formerly affiliated with Al Qaeda, were able to do this was because of the mass withdrawal of the Iraqi army and local security forces. These forces, loyal to the Shiite Muslim-led government in Baghdad, have been controlling parts of multi-ethnic Ninawa province for the past six years. Other parts of Ninawa are under the military control of forces from neighbouring Iraqi Kurdistan, which operates partially independently of Baghdad. The ISIS take over came quickly and actually began last Friday. After a series of suicide bombings were successfully carried out in the Mushayrafeh area, west of Mosul, a group of extremists were able to pass through security barriers erected by local police. The local security forces evacuated the checkpoints and withdrew to their headquarters. ISIS was then able to take over other parts of this area of the city, including the Najar, Yarmouk, Abar and Tanak neighbourhoods.

Local security forces, loyal to the government led by Prime Minister Nouri al-Maliki, then began to use their helicopters to strafe and bomb residential areas. Dozens of ordinary citizens were killed and wounded and a number of ambulances, on their way to or from bombed locations, were also hit.

For the past six years Mosul has been a tightly controlled and contested city; according to local observers, most of the city was controlled by the different brigades all answering to the Ninawa Operations Command, loyal to Baghdad. Up until Friday the Ninawa Operations Command had every street and alley in the city in its sights, through the use of checkpoints; many say the city was more like a big military camp – until last Friday.

The city has also had a continuous extremist presence – this was most obvious through targeted assassinations, threats against outsiders and widespread extortion. Over the past decade Mosul has been widely considered a base for Al Qaeda and its affiliates.

After fighting between the Iraqi Army and ISIS began, rumours began to spread in the city: There were apparently a large number of supplies as well as reinforcements coming from the Jazira area in Syria’s far northeast, which borders Ninawa. On Facebook one could see pictures showing hundreds of modern four-wheel-drive vehicles carrying gunmen all in black, armed with heavy weapons and lighter armaments, as well as their distinctive black extremist flag.

Apparently indiscriminate shelling by the Iraqi army as well as the rumours of an advancing extremist force caused a lot of local families to leave their homes and to try and make their way into neighbouring Iraqi Kurdistan, which has its own military and is generally seen as a safe haven within the country. At first, the Iraqi Army’s Ninawa Operations Command announced that it had re-taken the areas previously occupied by ISIS. But by the second day of fighting here, it was clear that these announcements were false.

The Sunni Muslim governor of Ninawa, Atheel al-Nujaifi, who is also the brother of one of Baghdad’s leading Sunni Muslim politicians, Osama al-Nujaifi, took to Mosul’s city streets, carrying his own Kalashnikov, accompanied by heavily armed civilians. He gave a speech calling upon the people of Mosul to arm themselves and asked them to form militias in their own communities, in order to protect the city. He also called upon former Iraqi army officers, who had been in the national forces until the 2003 US-led invasion of Iraq. After the US invaded, the Iraqi army was disbanded and military members of Saddam Hussein’s former political party, Baath, were no longer allowed to serve.

Mosul-based activist Jamil Abdul Rahman told NIQASH that the Governor al-Nujaifi was clearly disappointed by the way that the Iraqi army was behaving. “He also wanted to make local people feel better and to raise their spirits in order to encourage them not to lose their city,” Abdul Rahman suggests.

On Monday, members of the Iraqi army and other security forces were seen throwing down their guns, abandoning equipment and uniforms and changing their clothes, then going to hide among the crowds of frightened people trying to leave the city.

A police lieutenant stationed in Mosul, Amer Ahmad, told NIQASH that on Monday the Prime Minister had ordered that the police chief of Mosul and the commander of the Iraqi Army’s Second Division, stationed in Mosul, be replaced because of the dismal job they had done in defending the city. As well as those orders, two senior army officers apparently just left the scene altogether: These were the Iraqi Army’s deputy chief of the army, Abboud Qanbar, and the head of the Ninawa Operations Command, Mahdi al-Ghrawi. This was a big part of the reason why other members of the military simply threw down their guns and left the scene too, he suggests.

What happened next has been well reported. Members of ISIS then managed to take over headquarters of local police and army as well as council buildings and several media outlets, including local TV stations, Sama Al Mosul and Ninawa Al Ghad, and two radio stations, Ninawa Youth and Al Rasheed. This saw extremists capturing armament stores at Ninawa Operations Command and equipment at Mosul airport, including military helicopters.

Eye witnesses inside Mosul city told NIQASH that members of the Sunni Muslim extremist militias included Iraqis but also included fighters from a number of different Arab countries. They say there were thousands of fighters and that they deployed incredibly quickly inside the city.

By later Tuesday, ISIS had control of the both sides of Mosul city. They had sacked banks and financial institutions around the city, including one central bank where they apparently made off with about IQD500 billion (around US$420 million). The extremists then moved to take control of the towns of Baaj and Tal Afar, west of Mosul and closer to the Iraq-Syria border. Current reports indicate that ISIS militias are now moving into Salahaddin province too.

NIQASH reached Ninawa’s governor Atheel al-Nujaifi by phone. He said he was calling for help from the international community because it was clear that the central government in Baghdad had not been able to protect his province. He said that he had personally called Iraq’s Deputy Minister of the Interior, Adnan al-Asadi, and that al-Asadi had sent two regiments of the Iraqi army toward Mosul to help. “However because much of the 395 kilometres between Baghdad and Mosul is now under Daash’s [ISIS’] control the the regiments were forced to return to Baghdad,” al-Nujaifi said.

Al-Nujaifi confirmed that after the Iraqi army withdrew, the militants from ISIS had been able to collect a large amount of weaponry as well as armoured vehicles and troop carriers. Al-Nujaifi also said he was now going to Erbil, the capital of neighbouring Iraqi Kurdistan, where he would discuss the issue with the government of Iraqi Kurdistan. “Prime Minister al-Maliki has agreed to let Iraqi Kurdish forces interfere in order to recapture Mosul,” al-Nujaifi noted.

Eyewitnesses inside Mosul report that there are long queues of those fleeing the province at checkpoints to Dohuk, which is controlled by Iraqi Kurdish forces, as well as Shikhan, Badriya and roads into places like Erbil, the capital of Iraqi Kurdistan.

Many of the people fleeing potential violence in Mosul have actually been turned back at checkpoints and they’ve had no option but to return to their homes in Ninawa; they now say they are afraid that the Iraqi government might use barrel bombs or bomb indiscriminately, in order to fight the extremists. They are also very worried about supplies to the city of between 1.5 and 1.8 million inhabitants running out.

At the time of writing, the scene in Mosul could be summarised as follows: In some areas, there are many corpses on the streets, especially in the western part of the city. The local morgue says it is unable to accept any more dead bodies because it is full. It seems probable that locals in the city will begin burying bodies themselves in local parks and gardens, something they did before during bad times in the city.

The city streets also have plenty of evidence of how easily the city fell to ISIS: Burned out military vehicles and discarded uniforms lay strewn on the ground. In the distance there are columns of smoke coming from security headquarters that formerly belonged to army and police, but which are now controlled by ISIS.

And the extremists appear to be busy fortifying these buildings – which seems to indicate that these confrontations are highly unlikely to be over as quickly as they began; this may go on for months. 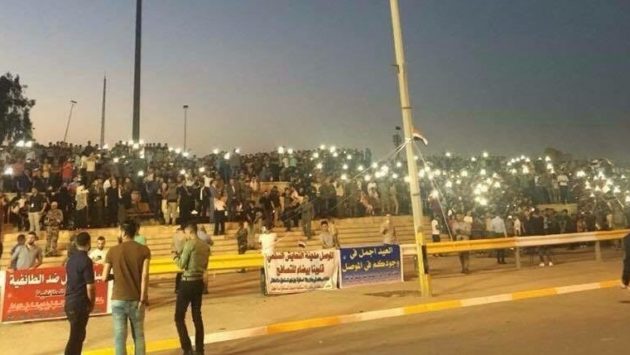 Eid in Mosul: A Youth Initiative Brings Together People from all over Iraq to Visit Mosul during Eid