By Toon Bijnens, Save the Tigris Campaign and ICSSI – Sulaymaniya, May 28, 2014

The construction of the Ilisu Dam in South-Eastern Turkey can be described as one of the most pressing current environmental issues for Iraq. Its impact will be mostly felt in the Southern part of the country, located at the downstream end of the Tigris River. The threat of Ilisu is looming over the beautiful wetlands of the Marshes, but also over population centers, such as fresh water scarcity-stricken Basra. However, it is a common misconception among Iraqi Kurds that the northern parts of Iraq will be exempted from any negative impact of the dam. All areas located downstream of Ilisu Dam will be affected, including Kurdistan. Yet even though any expert in the Kurdish region of Iraq will acknowledge its negative impact, Ilisu Dam is rarely a topic of discussion. It is generally believed that the water resources in the Kurdistan region will remain sufficient for the near future, despite the impact of the Ilisu Dam. This is false.

Due to the Ilisu Dam the Kurdistan Regional Government (KRG) will, like the rest of Iraq, experience a decrease in the water levels of the Tigris River. Seasonal streams provide the region with over half of its surface water resources. These flow patterns of the Tigris River will be altered by the operations of the Ilisu Dam, with serious consequences. Furthermore, the Ilisu Dam will have an impact on groundwater in the region. Currently approximately 650,000 people in Kurdistan (15% of the population) do not have easy access to water. A large number of these people depend on wells, and this figure is expected to grow. As the seasonal flood cycle is suppressed by the dam, ground water aquifers will be depleted.

Then there is also the issue of pollution. According to statistics of the Ministry of Health in the KRG, currently 24 out of 1,000 infant deaths can be attributed to polluted water.  Dams such as Ilisu will create more river pollution, as decreased flow will result in concentrated sewage and agricultural runoff.

On top of this, like most countries in the Middle East, Kurdistan is experiencing population growth and climate change. As the population is expected to grow to 5,500,000 by 2015, water resources will no longer be sufficient according to the Ministry of Planning. Climate change will lead to more droughts, such as in 2007-2009.

A bridge between Turkey and Southern Iraq

Another reason why there is so little debate on Ilisu Dam in the Iraqi Kurdistan, is the lack of awareness. When I was invited by the University of Duhok, located nearby the Tigris River, to give a seminar on the issue of Ilisu Dam as part of the Save the Tigris Campaign, I was surprised to find out that a substantial proportion of the students had not heard of Ilisu Dam. These were second and third years political science students.

The Campaign has made some efforts to spread more awareness of the Ilisu Dam in the Kurdistan region. When raising awareness, it is important to stress that Ilisu is an international, trans-boundary issue, involving Turkey, KRG as well as the other parts of Iraq. When the Campaign organized awareness events in Sulaymaniyah, I discovered that it is more common for local people to associate the issue with the town of Hasankeyf in Turkey – which is set to be flooded once the Ilisu Dam is operating — than to the Iraqi Marshes. Many people in the KRG are unaware of the existence of the beautiful heritage of the Marshes in Southern Iraq. Often people in Iraqi Kurdistan feel they have more in common with the Turkish-Kurdish region across the border, than with their fellow Arab countrymen. This need not be a problem. In fact, it could well be turned into an advantage: while the KRG is part of Iraq, it has ethnic and historical bonds with the Kurdish people living in the dam-affected area in Turkey. Because of its ties with both regions, the KRG could play a pivotal role Iraq and Turkey in finding a solution over Ilisu Dam.

Civil society organizations have the responsibility to correct some of the misconceptions that exist in Kurdistan over water resources, and to put the issue of Ilisu on the agenda in the Kurdish political sphere. The Kurdish government expressed its support to spread awareness on environmental issues, and it is the responsibility of civil society to follow-up on that. Awareness is essential not only among Kurdish citizens, but also among Kurdish government officials.  Earlier this month Ekopotamya Network, a coalition of Kurdish environmental organizations from Iraq, Turkey, Iran and Syria, held its fifth conference in Sulaymaniyah. Ekopotamya Network advocates against the construction of dams and advocates for consultation with local communities and for negotiations between riparian states. During the conference, I presented the Save the Tigris Campaign’s legal strategy against Ilisu Dam. Ekopotamya Network recognized that Ilisu Dam is part of a range of water issues in the Kurdistan region. The network voted to extend their work to include pollution and droughts as well, as these topics are closely woven into the issue of dams. At the moment, Kurdish civil society activists are not clear as to just how bad the water issue in Kurdistan is, as was apparent by questions I received on the issue from local environmental activists. This demonstrates that there is a need for more research and study. The Campaign has been a long-time advocate for a comprehensive impact assessment on Ilisu Dam, but research should go beyond this to encompass all of KRG’s water provision. During the Ekopotamya Network conference, civil society activists discussed the need to collaborate more with academics. In Kurdistan and Iraq, people often have the tendency not to look beyond their own field. Therefore the will of Kurdish civil society to cooperate with academics marks a significant step forward.

The issue of Ilisu Dam requires technical as well as political solutions. However, the latter is more sustainable and more profound. As the Kurdistan region of Iraq is a landlocked region, it cannot control most of its own waters, let alone large dams built outside of the country. The fresh water levels of the Tigris River in the KRG will be further reduced by Ilisu Dam, which in its turn will exacerbate water conflicts not only between Iraq and Turkey, but also between KRG and the other Iraqi provinces. In 2011, Arab farmers complained that the amount of water released by Dukan dam in the Kurdistan region was insufficient and that this was a deliberate strategy by the KRG. More recently, the Kurdish government has been using the threat of water cut-offs against the Baghdad central government in its ongoing budget dispute. Even among Kurdish provinces conflict over can arise. There are disparities between the Kurdish provinces’ amount of water resources. While one province has a water shortage, the other might have an abundance of water. Erbil province is known to have more ground water than Sulaymaniyah, a province that can barely meet its water needs. Therefore an all-inclusive political solution is needed for all the regions and countries in the Tigris River basin who will be affected by the Ilisu Dam.

More dams as a solution to Ilisu Dam?

Despite all of this, a concrete water strategy for the KRG is still lacking. Prime Minister Nechirvan Barzani warned, “[A water crisis] would bring plenty of problems with it and would threaten the region’s future as that of future generations,” referring to Ilisu Dam. Barzani expressed the KRG government’s commitment to protecting the environment: “The KRG has to support the issuance of laws and the establishment of NGOs and commissions that are specialized in protecting the environment of the region, in addition to enforcing the law and fulfilling its duties in that vein.” Environmental protection encompasses many different issues and many different solutions. The KRG government is mostly focused on technical solutions for its water problems, such as building dams. Last year the Kurdish government announced plans to build 3 new major dams by 2018, despite the fact that Kurdish environmental organizations fiercely oppose such construction. Dams will give the region the impression that it has its own water resources under full control, but this will only lead to more conflict, mostly with downstream neighbors in southern Iraq. Moreover, it does not solve the issue of Ilisu Dam. Again, this requires a political solution.

Towards political negotiations with Turkey

In Kurdistan, one often hears that Ilisu is an issue that concerns the central government in Baghdad, and not the KRG. Reality is different; it is very much a problem that concerns the Kurdish region. The Save the Tigris Campaign calls upon the KRG to work towards negotiations with Turkey, as part of the central Iraqi government. Kurdish parties take seats in the Iraqi parliament and therefore have as much responsibility as all other Iraqi parties to work for negotiations. Furthermore, heritage in South Eastern Anatolia will face huge destruction due to the Ilisu Dam. Can the Kurdish population in Iraq watch this Kurdish heritage disappear, in the name of economic progress?  The Save the Tigris Campaign recently released a policy paper in which it outlined its approach to negotiations with Turkey. KRG can play a pivotal role in these negotiations, as KRG borders both Turkey as well as the Arab parts of Iraq. However, the ties between Turkey and Iraqi Kurdistan are quite complicated. As a landlocked country, Kurdistan is very much dependent on its economic ties with Turkey, which have only recently began to flourish. Some people suggested to me the KRG should turn to Iran for support, unaware of the fact that Iran is building dams too which will damage Iraq. Other people suggested a turn to an international player who could mediate between Turkey and KRG/Iraq. Unfortunately, despite close economic ties, little progress has been reached in negotiations between both countries. Though the Save the Tigris Campaign believes that water is a human right over which one cannot compromise, some analysts argue that water, which includes the issue of Ilisu, should be part of a larger negotiation package. This package can also include oil – of which KRG has plenty. The truce between the Turkish government and the separatist PKK group, as well as the Gezi Park protests in 2013 offered momentum for negotiations with Turkey.  This momentum has now passed somewhat, given that Erdogan was comfortably re-elected earlier this year, and the KRG is in a budget dispute with the Baghdad government. Yet one should believe that negotiations are always possible, as the current political climate in Turkey is unpredictable and susceptible to changes. The conflict between the PKK and the Turkish government could always erupt again if the GAP project, of which Ilisu Dam is part, fails to be beneficial to the Kurdish people living in the area. Finally, if there is willingness for KRG and the central government to put their issues aside, as soon as a new central government is formed in Iraq, another window of opportunity might emerge.

Some Kurdish academics I met argued that it is impossible to negotiate with Turkey due to its strong hold over the economy of the KRG. Activists expressed some despair over the issue of Ilisu Dam. This need not be the case. In contrast to the rest of Iraq, the KRG region has a track record of stability and solid governance. As the KRG is not plagued by constant security issues and sectarian conflict, it should have more time and energy to focus on urgent environmental issues such as Ilisu Dam. And as Ekopotamya Network shows, there is a strong trans-national Kurdish environmental network, providing backing and necessary expertise from several different countries.  It would be a crime not to use these advantages when the momentum is there. 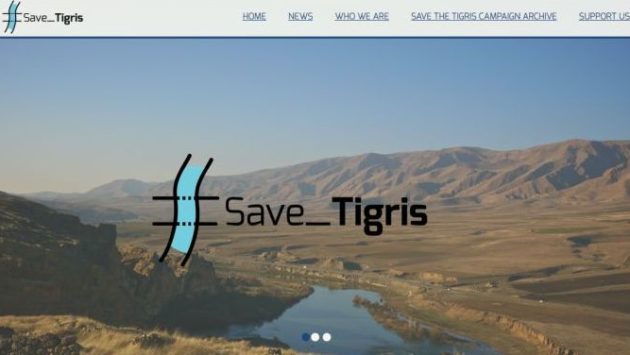