The Pentagon says the last of its defense contractors left Iraq in December, just weeks before portions of the increasingly violent country were conquered al-Qaeda. There’s a catch, however: While the number of Iraq contractors on U.S. payrolls has plummeted, some of those same individuals are still there, working directly for the Iraqi government.

The change is part of the United States’ evolving relationship with Baghdad. The last Defense Department contract with Iraq was transferred to Prime Minister Nouri al-Maliki’s administration in December, said Navy Cmdr. Bill Speaks, a Pentagon spokesman. That leaves the Defense Department’s number of contractors in Iraq at 0, down 6,624 in October, according to a quarterly report released at the time. Of those 6,624 contractors, 1,626 were U.S. citizens, 2,807 were civilians of another country, and 2,191 were Iraqi citizens from Iraq, the report said.

Work on the last major Defense Department contract in Iraq ended Dec. 15, when the Iraqi government took over a U.S. facility at Umm Qasr Naval Base, Speaks said. The United States built a ship repair facility there for the Iraqi military, and opened it in 2011.

The change underscores how the U.S. military continues to disentangle itself from Iraq even as a recent surge in sectarian violence threatens to undo years of hard-won gains. There are now just 250 U.S. troops in Iraq, Speaks said, down from 157,800 at the height of the surge. About half are assigned to the Office of Security Cooperation – Iraq, which oversees the U.S. military’s interaction with Iraqi forces. The rest are primarily Marine Corps security guards who work at U.S. diplomatic facilities.

One example of a company staying in Iraq despite the change in who pays its bill is Triple Canopy, the behemoth defense firm based in Herndon, VA. It has made a fortune as one of Washington’s primary security providers in war zones, and is one of eight companies with a piece of the State Department’s five-year, $10.8 billion Worldwide Protective Services contract, which was signed in 2010 and lays out the terms by which contractors provide security to U.S. diplomatic facilities and personnel across the world. But Triple Canopy also had a variety of smaller contracts with the Pentagon for other work in Iraq, and intends to continue working there now.

“Recently all U.S. government agencies have reduced their reliance on contractors due to budget cuts and have de-scoped contracts across the board, including in Iraq,” the company said a statement to Foreign Policy. “Contractors will continue to remain engaged in Iraq in the near future. However, the majority of these personnel will likely be working on commercial extractive and construction projects.”

The State Department, meanwhile, still has about 5,000 contractors on its books working in Iraq at the embassy in Baghdad and its consulates in Basra and Erbil, a department spokesperson told FP. About 2,000 are U.S. citizens. Both numbers reflect a steep decline from January 2013, when the State Department had 12,500 contractors – including about 4,500 American citizens — working in Iraq.

With virtually no U.S. troops left in Iraq, the remaining contractor force handles a variety of missions that would have once been handled by the military. Dyncorp International, for example, signed a five-year deal with the State Department in 2010 that could be worth up to $894 million to provide a private air force that includes UH-1 utility helicopters and DHC-8 planes.  The company provides not only air transportation, but movement of “quick reaction” forces that might be needed in an emergency, medical evacuation operations, route reconnaissance and aerial convoy escort, a State Department official said.

Top officials at the U.S. embassy in Baghdad plan to continue reducing staff and facilities as the United States establishes a post-war footing with Iraq, according to a State Department inspector general report released in May. The department spent $698 million on security in 2012 — more than it did on any other mission, the report said.

The current numbers, even with reductions, illustrate the continued problems that go with raising a separate contractor force to provide security, rather than using the U.S. military, former U.S. Rep. Christopher Shays, R-CT, told FP. He was co-chairman of the Independent Commission on Wartime Contracting, which was established by Congress and determined that at least $31 billion in U.S. funding had been wasted due to poor oversight, fraud, waste, and abuse. 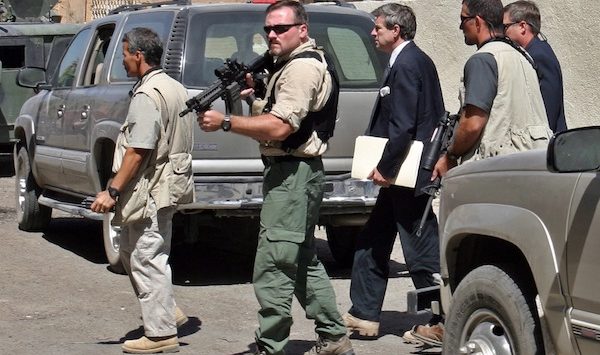 What Justice for Iraqi Victims of Private Military and Security Companies?