More than 150 activists and members of civil society gathered for March 8th Celebration in Suleimaniya under the slogan of “No for bargaining on the women`s rights and issues”. Demands of Zhiyan Group on the March 8th, International Women`s Day  To: The citizens, public opinion, media, civil society, political parties, and all concerned parties. Our group will receive March 8th differently from the working protocols of official and non-official parties in the Kurdistan region. We consider this occasion as an opportunity to uncover the nature women and girls’ lives in the Kurdistan region of Iraq. At the same time we have demands for the development of women`s living emphasizing on their rights. For this year, our group will observe March 8th under the slogan “No for bargaining on women’ s rights and issues“. It is clear that, as compared to other parts of Iraq, the Kurdistan region has more attention to women`s rights. Yet, the nature of the traditional society and the lack of the true role of the institutions to consolidate and to fasten women`s rights and issues has always kept us in a vicious circle of injustice, in confrontation and bargaining, that concludes in violence, lack of political and economical, social, scientific and equality in employment and many other deficiencies in the daily life of the women in Kurdistan region. Despite the continuous progress of the political and economic aspects, a violent and a classic society has been produced. Although the domestic violence law has been approved, the directorates of trace violence against women were opened and the Women`s High Council has established, still the statistics of the violence, self-immolations and killing of the women haven`t change. In fact, it is not easy to solve the social and cultural issues at a given time, as it is not to qualify it as a crime, nor as an ordinary phenomenon. The responsibilities will not only lie on the official and legislative institutions, but all individuals, citizens and the society all together are part of the issues and have a significant role in solving them and particularly working on changing social perceptions about women’s issues. Lastly, the organizations, institutions, courts, police departments, hospitals, schools, media and the mosques all together have an effective role and concerning to advocacy, it is very significant if they have plans, programs and a transparent follow-up on women`s rights. Zhiyan group will attach a number of demands to this petition. As we wish to say that in the past duration whether as a group or as activists or members in the group, we were always tried to carry out our duties and we promise to watchdog the women rights and never agree to make any bargaining whether it be by any party. 1- The execution of the article no. 8 of the domestic violence law very seriously and all courts, police stations, hospitals and all other parties to abide to that law. Though the law was released in the 21st of the last month, but unfortunately the steps in implementing that law are not up to the mark and it often being neglected.

2- The enforcement of the personal status law`s articles which have been amended in the year 2008, but they have not be implemented by the courts properly. However the polygamy has been limited in this law, but it still exists and we demand it to be abolished at once, and to bloc all the ways that let this phenomenon to continuo.

3- The general pardon laws are considered to be against the women`s issues, however the honor killing was excepted in this law, but during the implementation of this law, women killers were freed, and we demand that these laws to be implemented fairly.

4- To implement the quota of political participation inside the government, the same way it has been executed in the parliament. All foundations and the employment process, as we demand the equality in job opportunity for women and girls.

5-To include the gender budget in the general budget. The gender plan should be incorporated in the design and the content, and in any expenditure of the other sections of the budget including the implementation of different projects. The budget should emphasize on human development, gender equality and should be the standard for implementing and approving it.

6- To provide the equality in gender between women and men is the condition for a radical change in the education system.

7- To work systematically for a healthy social education, and to separate the violence issue and the social and Cultural aspects, and criminalizing all direct and indirect suits by the pulpits whether inside the mosques or in the media.

The activities of the Zhiyan group in March 8th were the following:

First: On Friday, March 8th, 2013 at 3 o’clock in the afternoon, a demonstration was held in Saholaka St. intersection with Salim St. and head toward Parliament office, and all parties and individuals are free to write any messages, banners related to the demands of women`s rights.

Second: Zhiyan Group circulated the petition and the demands to all concerned parties, as we are asking your help for distributing and to follow-up implementation, and from there we will head toward the Culture Café.

Third: Zhiyan Group organised an Open Mic. A special evening about women`s issues in the evening of the 8th March in Culture Café, and in the evening some artistic activities will be presented. 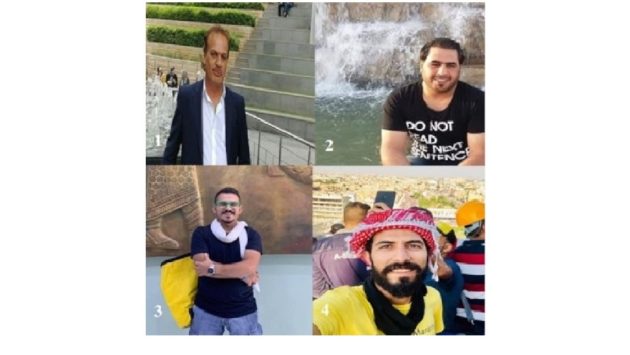