One of the kids began drawing his portrait, and bestowed it with bright colors, childhood innocence, and the beauty of nature surrounding him. He made it a speaking portrait, especially after he wrote a phrase in Turkish at its center. I did not know it’s meaning until his teacher translated it into English: “Leave my Hasankeyf.” He knew as the rest of the people of this village know that the Turkish government plans to immerse their village with water after the construction of Ilisu dam.

The village of Hasankeyf is located in the southeast of Turkey, in the province of Batman, which lies about 150 km from Zakho. It is one of the old historical areas, the first date of settlement there was recorded since 9500 B.C. where the Assyrians and Syriacs and Arabs lived there as well as a Kurdish majority lives there today; the Turkish government has declared it as a nature reserve in 1981.

Turkey started the construction of the Ilisu dam on the Tigris River in 2006 and it is expected to complete it in 2015. The dam will generate electric power with the capacity of 1200 MW and control the flow of the Tigris River’s water. The building of the dam is a controversial issue because Turkey will flood the history of an entire village where the number of archaeological sites discovered reaches nineteen, notably the Old Tigris Bridge which was built in 1116 by the Artuqids, and the Zeynel shrine where Zeynel Bey was buried on the other side of the Tigris River. Zeynel Bey, the son of Uzun Hasan was the governor of the Akkoyunlu breed that ruled Hasankeyf in the 15th century. There is also Imam Abdullah shrine, which has a cube shape and it is located to the west of the new bridge in Hasankeyf. Abdullah was the grandson of Imam Ja’far al-Tayyar, the uncle of the Prophet Muhammad (Peace be upon him) and the cemetery dates back to the 14th century.

The impact of the dam goes beyond Turkey to reach the marshes in the Chibayish district and the southern part of Iraq in general, which derives its water from the Tigris River. The dam will cause drought in this region and will eliminate its rich biodiversity.  Another impact will be the displacement of population to other areas due to the elimination of livelihood sources. Not only that, but it will also lead to the risk of drought on the Tigris River which will force the Iraqi government to link branches from the Euphrates River to the cities that are located on the Tigris River. This will lead to lower water levels in the Euphrates River. In spite of all these serious consequences that would affect the Iraqis; we have not seen a serious attitude of the Iraqi government against the construction of the dam.

Many international and local civil society organizations have collaborated and taken a position against the construction of the dam, trying to save the people of Hasankeyf and its history in Turkey and to save Iraqis people of the marshes in Iraq. ICSSI and Nature Iraq, along with activists from the village of Hasankeyf, Iraq, Turkey and other countries, have come together in a petition to make Hasankeyf a UNESCO world heritage site and thus prevent the construction of the dam and its flooding.

All these attempts as well as the case presented by the Turkish Chamber of Engineers had a good result. On January 7, 2013 the State Council in Turkey issued a judgment to stop the construction of Ilisu dam as a result of the failure of the Turkish government to provide a study of the environmental damage of the dam. But the last can appeal within seven days or may resort to pass a new law to circumvent the decision. For more information click here.

The latest event organized by these international organizations was in the Chibaish marshes in Iraq. They organized a colorful tour in the Central marshes attended by many Iraqi professional photographers. This event was followed by the Hasankeyf Ingathering in the village of Hasankeyf to introduce its history and how the damage of its submerged with water not only affects the historical value of the village, but also will affect the moral value of the population.

One of the activities in the Hasankeyf Ingathering was an art workshop for the village’s children, which was facilitated by locals and international friends of Hasankeyf. The paintings drawn by the Iraqi children in Chibayish (90 km east of Nasiriyah) were side by side to paintings of Hasankeyf children, which were varied in spring colors but were similar in content. Drawing depicting water and the mountains point to the children’s relations to the nature surrounding them. I can only imagine what the children will draw later, after their region is turned into a desert compared with marshes currently in southern Iraq or to a submerged area by water compared to the natural beauty decorated with caves in Hasankeyf village in Turkey.

The original version of this article appeared on April 21st, 2013  in Arabic and can be found here 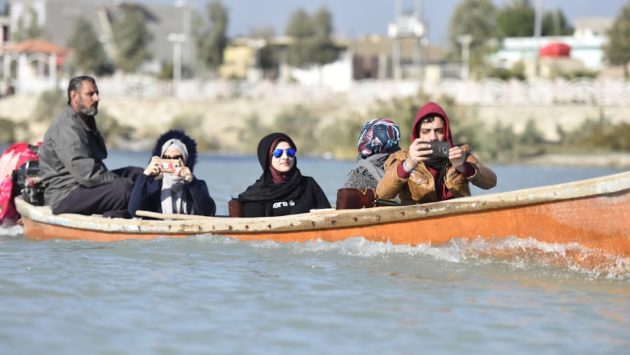