The Iraq Civil Society Solidarity Initiative (ICSSI) expresses its deep condolences to the families of the civil activists that were killed or injured in Fallujah last week, and call for immediate investigation about who was behind this criminal attack. Three civil activists from Tammuz organization- Fallujah office were killed and other 2 were badly injured in Fallujah, one of them also from Tammuz, the night of 31st of March. All of the victims were part of the organizers of the ongoing peaceful protests in Fallujah. In adition were involved in many civil activities like giving relief to the Syrian refugee in Al -Anbar province and working for the civil and political rights and fundamental freedoms of the citizens of Fallujah. It is the duty  of the Iraqi government to protect civilians and to provide a transparent and efficient investigation about the criminal attacks that target Iraqis in general and the human rights defenders and civil activists all over Iraq. Read the letter of  Tammuz Organization’s:

Tammuz Organization’s Obituary for their Members

Is with tremendous grief and agony that Tammuz Organization for Social Development presents this obituary for the missed members of the Organization, Hikmat Tawfeeq Alsaab, the director of Anbar province branch of the organization, and his colleagues Talib AL-Esawi and Othman Khalil. They have been attacked by the terrorists, the enemies of life on Sunday night in Falluja. Their colleague Mustafa Al-Kuhli was also injured during the attack. WE condemn and denounce this vicious act and consider missing our members as a huge loss. Those killed are well-known for their activities in the field of civil society, and humanitarian work. Many people witnessed their excellence aiding Syrian refugees. In the meantime, we demand the authorities in the province of Anbar to investigate this incident and hold accountable those responsible for the murders. We also urge the Iraqi security forces to enhance the protection of non-government organizations. We lost Hikmat Al-Saa’b, one of the most active members of the organization who has been working to achieve civil democracy. Hikmat and his colleagues were members of the democratic civilians initiative. We present our deep condolence to Hikmat’s family and every other member of the organization to this dire loss of such a dedicated person. We pray for his soul and wish immediate recovery for his colleague Mustafa. Shame on you terrorists and murderers for what you did. 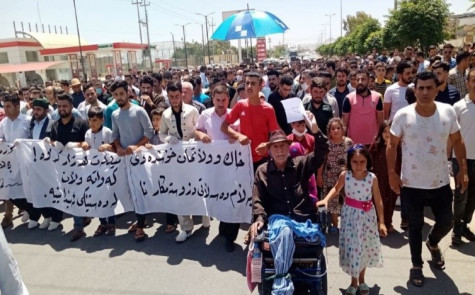