Since the earliest days of the October Revolution in Iraq, criminals have assassinated activists and human rights defenders, both women and men. Despite having committed these horrible crimes they have not been held legally accountable. This has led to an increasing number of intentional killings, kidnappings, and enforced disappearances of well known leaders and supporters of the protests. The latest are the assassinations of Hashem Al-Hashemi in Baghdad, and the prominent Basra protest leaders, Tahseen Al-Shahmani and Dr. Reham Yaqou.

What is deeply concerning is the lack of commitment on the part of those Iraqi authorities who are responsible for protecting the lives of Iraqi citizens and guaranteeing our rights. This is a vitally important matter. The failure to identify all parties that issue orders to kill, to establish clear and concrete procedures to arrest and prosecute all those responsible, and to bring perpetrators to justice is an outrage.

This failure also highlights the absence of any active and public condemnation of these crimes from other government entities, including the House of Representatives and the Public Prosecution Service. We are infuriated by the profoundly inadequate response from the judicial authority to bring these criminals to the courts to receive appropriate penalty.

It is equally vital that all who were responsible for the deaths and repression of nonviolent protesters and committed human rights defenders are condemned by international human rights organizations, the United Nations, and diplomatic missions in Iraq. These condemnations must continue until there is justice and accountability. If the Iraqi government cannot or does not take action, then we must take our struggle outside Iraq’s borders and seek action and intervention through international courts and tribunals.

We are issuing this urgent statement because we have received many messages from those who are concerned about plans to assassinate specific individuals in the near future. These worried civil society activists and leaders of the youth-led movement, the October Uprising, are being subjected to a smear campaign on social media which is inciting others to commit murder. This presents the Iraqi authorities – the Government, the Parliament and the Judiciary – with an historic responsibility to halt the spilling of Iraqi blood, to safeguard all citizens’ right to life, to protect their rights to freedom of expression, explicitly guaranteed in the Constitution, and to respond to the legitimate demands of the protesting youth.

Thus we, the undersigned unions, organizations, associations, activists, and human rights defenders, have joined together to form an initiative called “Support the October Uprising”. We join those involved in the uprising in their demands for accountability. Justice will come when genuine and transparent investigations are conducted, and the killers and those who aided and enabled them are identified and held responsible for their crimes. Government authorities must take measures immediately to protect the peaceful protesters and stop any further assassinations, threats and violence. Finally, there must be a swift and sincere response to the repeated and urgent calls from the youth of the October Uprising to hold fair and free elections, and to prevent from running for office all those who have directed or carried out these assassinations or profited from corruption.

We appeal to the good people of our nation to stand with us in support of this national campaign of solidarity. Join in our activities to express loyalty to the martyrs of the valiant October Uprising and to support its just demands in achieving the changes necessary to build a better Iraq. 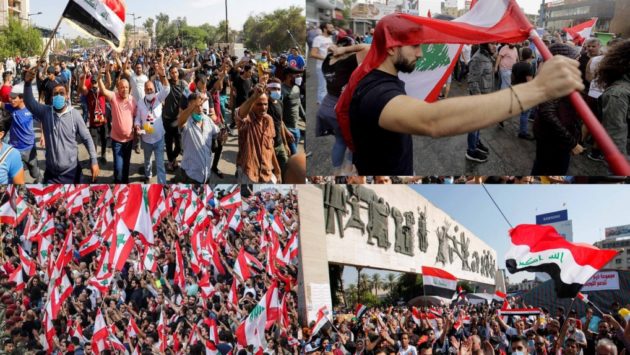 What Does It Mean to Continue Demonstrations?