The first report issued by the Iraqi Observatory of Worker and Employee Rights monitored the period from 1 – 31 May 2020 in order to assess the status of workers’ rights given the strained economic conditions in Iraq. Because there is no clear economic vision for the country, and despite the changes in the political landscape, there is still large scale corruption, the lives of workers continue to be significantly impacted. The delay in the formation of the new government led to an increase in the number of unemployed and an almost complete stop to life as Iraqis knew it. The matter became more complicated after the outbreak of coronavirus in Iraq and the rest of the world, and was compounded again with the decrease in oil prices, on which the Iraqi economy relies. All these factors have greatly affected workers.

The Observatory’s new report records a number of violations committed against Iraqi workers based on media monitoring, reports from unions, and a team of observers spread throughout the provinces (a total number of 18 monitors, as well as a group previously trained in a number of workshops led by the Peace and Freedom Organization).

Among the most prominent violations mentioned in the report, the Ministry of Labor and Social Affairs issued an official paper which recognized only the General Federation of Trade Unions as representative of the trade union movement in Iraq — this narrow scope does not give the other existing unions sufficient voice and power. This is a clear violation of trade union freedoms approved by the Iraqi Labor Law of 2015 and 2017. A committee of Iraqi trade unions called on the government to expedite the legislation of the Trade Union Organizations for Workers and Employees Law in Iraq, a draft of which has already been submitted to the Council of Ministers. The Observatory stressed that the Ministry of Labor and Social Affairs should stand with all unions, and urged the government to expedite the legislation.

The report also discussed the Cabinet’s issuance of an order to form a crisis cell to limit the spread of the Coronavirus. While this was certainly a crucial step to take to ensure public health and safety, there were no trade unions or Employee federations included on the committee created to form the cell and determine its role. The omission of these voices in such an important endeavor made no sense. After all, these organizations have a unique relation to the labor market and the declining economic situation due to the crisis, and they are acutely aware of and impacted by the health issues and occupational safety at work sites.

The report touched on the violations committed against workers in southern Iraq, particularly in Maysan and Basra, where a number of employees were laid off from their jobs. In response, a number of laid-off workers in the Kahla area in Maysan held a sit-in to protest their dismissal. The report also discussed the steps taken by the Governor of Basra to handle the situation.

The report reviewed violations of the minimum wage in Iraq — which amounted to a loss of 350,000 dinars for workers — after the Ministry of Electricity issued a letter recommending that certain companies reduce salaries in an attempt to solve the financial crisis.

The report clarified violations recorded in northern Iraq, specifically in Dohuk Governorate. A delay in the payment of teachers’ salaries, those of health workers and cleaners in the Kurdistan region, resulted in protests that led to the arrest of dozens of demonstrators, according to the Human Rights Watch report. A teacher, Badal Barwari, was arrested and detained for two weeks and released after Eid Al-Fitr, for speaking out publicly out about the fact that the region’s employees have received only one month’s salary since the start of 2020.

This report outlined the measures taken by employees in all sectors and in several governorates when they did not receive their salaries. There were demonstrations involving dozens of employees in Diyala, in Muthanna and Basra, and others are still ongoing in southern Iraq. The government reaction to these violations has been weak, for instance, a decision to compensate the unemployed with an emergency grant of 30,000 Iraqi dinars, equivalent to a mere one thousand dinars per day for a month — an amount that is considered below the poverty line and does not meet the needs of a citizen for even a day! To date, no employee has seen any money from this grant.

To find out more and read the full report, click here 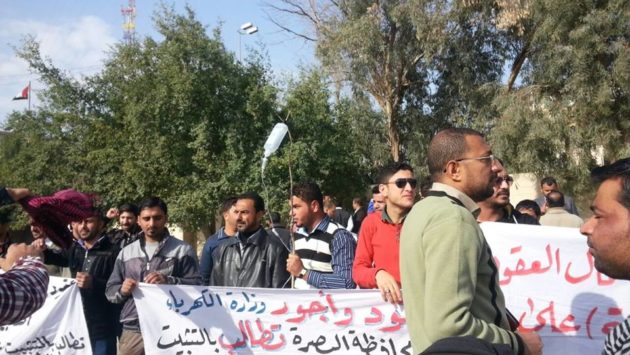