The health, economic and societal problems that are gripping the world due to the global coronavirus pandemic are undeniable, yet the crisis hides a positive aspect represented by the significant environmental recovery now taking place. Much of this comes from the decline in greenhouse gas emissions and organic toxins from industrial processes and human activity in its various forms. In the article below, we review the most prominent forms of this recovery, and some key factors that contributed to it. We encourage humanity to learn from the tragedy of the crisis by evaluating human behavior and improving the way we deal with the environment.

Because China was first of all countries in the world to face the harm wrought by coronavirus, it provides a unique opportunity to study environmental changes within the country. Even taking into account relevant differences, by observing the Chinese case we can obtain a more comprehensive picture of the environmental impact of the crisis across the rest of the planet.

According to the latest report from Sustainability for All, China’s impact on the environment (through, for instance, its massive production of greenhouse gases) contributes dramatically to climate change. Chines industry produces approximately 800 million tons of thermal emissions per month due and its dense urban populations are must endure constant exposure to smog and other pollutants.

With the outbreak of the Coronavirus (COVID19) and the cessation of many industrial activities, levels of greenhouse gases have started gradually to decrease: NASA and the European Space Agency (ESA) have recorded a significant decrease in the flow of nitrogen dioxide (NO2), one of the harmful greenhouse gases emitted from cars, power and industrial plants, over China. This is clear evidence that the change is at least partly related to the economic slowdown brought about by the spread of the virus. The maps below (captured by the European Space Agency’s sentinel-5 satellite) show the concentrations of nitrogen dioxide pre-quarantine and during quarantine period.

“This is the first time that I have seen a significant drop in space caused by a specific event,” said Fei Liu, an air quality researcher at NASA’s Goddard Space Flight Center. Liu reports that he observed a decrease in NO2 gas in many countries during the economic recession that started in 2008, but the decline was gradual and could not be so clearly attributed to any single event. Scientists also noticed a remarkable decrease around Beijing during the 2008 Olympic Games but the effect was detected primarily around that city only, and pollution levels returned to their former levels after the games ended.

Air traffic around the world is also a major cause of pollutants. Aircraft engines emit heat, noise and CO2 particles, lead oxides, black carbon and other gases and pollutants that interact with each other and with the atmosphere, ultimately causing great damage to the environment. Pollution resulting from air travel has been continuously increasing recently due to a rapid growth in world economies and increased connectivity brought about by globalization.

Because of the global spread of COVID 19, air traffic has decreased significantly, and even stopped completely in some countries.  This has led to a noticeable decrease in air pollution in several areas around the world, especially those where the movement of air has ceased.

The current crisis has alerted the whole world of the need to change consumption patterns, especially food consumption. It has become clear that unsafe food handling and the inclusion of certain foods in the human diet played a direct role in the spread of the virus. A recent global dialogue addressing these practices recommended that we make permanent changes to behavior. Scientists and researchers are urging societies to adhere to the approved food pyramid designed by the Ministry of Health and Human Services (HHS), which is made up of environmentally friendly nutritional elements that do not transmit diseases.The world is also coming to recognize that the advances in technology and scientific and industrial progress are not sufficient to ensure that humanity is protected from the dangers of severe environmental damage and climate change.  Principles of sustainability, significant change to consumption patterns and the use of natural resources must be adopted to save ourselves and our world. 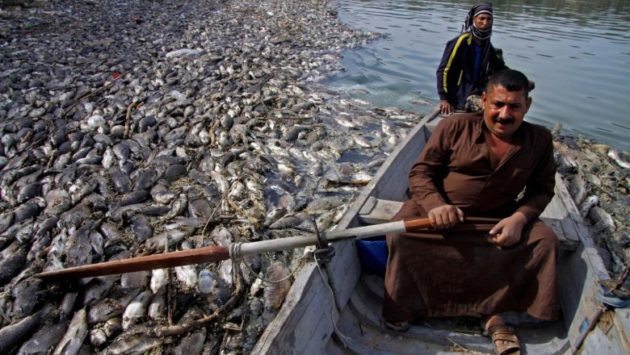 Mystery Over Thousands of Dead Carp in Euphrates River