On Tuesday 17 March, President Barham Salih officially chose Mr. Adnan Al-Zarfi to form the new government, 15 days after Muhammad Tawfiq Allawi apologized and withdrew his nomination, acknowledging that he did not have the support of the people needed to assume the position. Al-Zarfi, the former governor of Najaf and the head of the Victory Alliance bloc in the Iraqi parliament formed by the former Prime Minister Haider Al-Abadi, now has the task of forming a government that will win the confidence of the parliament within 30 days.

If he succeeds, Al-Zarfi must organize early parliamentary elections, resolve the issue of the presence of foreign forces on Iraqi soil, deal with the repercussions of the spread of COVID-19 and the collapse of oil prices.

Al-Zarfi’s appointment came after Muhammad Tawfiq Allawi failed to form a government and announced his withdrawal early this month. Allawi was not able to persuade the parliamentary blocs affiliated with the Sunni and Kurdish Alliance to support his cabinet and his government program. As a result, the government of the resigned PM Adel Abdul Mahdi continues in the role of caretaker of the Iraqi government, the position he has held since last December.

Al-Zarfi’s name was among the names proposed by the committee of seven MPs formed by parliament. The committee had agreed on three names to propose to the President of the Republic to form the government, namely, Adnan Al-Zarfi, Naim Al-Suhail and Mohammed Al-Sudani. The major political blocs, “Al-Fateh”, “State of Law”, and “Sadqoun” (the parliamentary wing of the armed political faction, Asaib Ahl al-Haq), have been protesting the choice of Adnan al-Zarfi since debates about who would fill this role began.

Following the announcement of the appointment, four major parliamentary blocs made a joint public statement refusing to allow President Barham Salih to give Adnan al-Zarfi the power to form an interim government. This led some to expect that Al-Zarfi would face great difficulties in passing his cabinet formation in the House of Representatives.

The joint statement issued by “Al-Fateh” bloc (led by the Secretary General of the Badr organization, Hadi Al-Amiri), the “State of Law Coalition” (led by Noori Al-Maliki), the “National Contract” bloc (led by Faleh Al-Fayad) and the “National Approach” (representing the Al-Fadhila Party), accused President Salih of violating the constitution as he did not, according to their opinion, allow the largest bloc to choose the prime minister.

Their statement put forth the following: “We have a constitutional entitlement which has been ignored, and constitutional violations have occurred, the last of which was the refusal by the President of the Republic, Barham Saleh, to allow the largest bloc in government to choose the new prime minister.”

The statement added, “President Salih’s appointment of Adnan Al-Zarfi will have repercussions that threaten civil peace and may lead to the disintegration of our national unity. Therefore, we announce our clear rejection of this path and the potentially damaging consequences of this appointment.”

Another statement was issued by the Political Bureau of the Al-Hikma movement, led by Ammar Al-Hakim. The statement voiced objections to the mechanism used by President Salih in appointing Adnan Al-Zarfi as head of the next government. More specifically, the statement said, “We are concerned about the method adopted in making this appointment,” going on to accuse Barham Saleh of “indifference to some of the key forces at play in the political arena.”

The Federal Court, in contrast, said that the appointment was constitutional, that President Salih’s choice is legitimate even if it runs counter to the largest parliamentary bloc. This is based on an interpretation of the Iraqi constitution which allows for the president to appoint a new prime minister within 15 days of an apology and withdrawal of the old one.

All this is taking place amidst an incredibly fragile political and security situation. Political experts assume the missile attack that took place late Tuesday night/early Wednesday morning near the Peace Palace – the presidential palace in which Zarfi was assigned – was one of a number of threatening messages sent by the opposition to Al-Zarafi. The opposition blocs continue to express their dissatisfaction and even threaten the use of force, reiterating their adamant rejection of this appointment. The leader of “Asaib Ahl al-Haq” militia, Qais Al-Khazali, said in a tweet addressed to President Salih, “You have violated the instructions of the religious authority which states unequivocally that the candidate must be not controversial,” adding, “You have contradicted yourself: this appointment endangers the civil peace because the opposing forces and their constituencies flatly reject your candidate, and will not allow this to pass.”

The leader of the Sadrist movement, Muqtada al-Sadr, called on those he described as “friends from neighboring countries” and others described as “occupiers,” not to interfere in the Iraqi process to choose a president of the Iraqi government, to refrain from all interference in the internal affairs of his country. Al-Sadr tweeted that the struggle endured by Shiite politicians had become intolerable, and is what led to the change in the process by which the PM was selected. He added that the selection of incompetent people by major political blocs, and the lack of consensus on a candidate is the reason for the current unacceptable candidate. Al-Sadr’s tweet concluded with a call for blocs to to leave their differences behind and focus their attention on ensuring the sovereignty of Iraq.

Al-Sadr’s tweet was a direct response to a tweet from the US Secretary of State, Mike Pompeo, who expressed conditional support for Al-Zarfi. Pompeo stated that Iraqis want a government that supports Iraqi sovereignty, provides basic services to all, is not tainted by corruption, and respects human rights. Pompeo insisted that the newly designated Iraqi Prime Minister, if he places these interests first, will have American and international support.

The National Front for the Salvation of Iraq (Sunnah) welcomed the Republican Decree to appoint Al-Zrafi to head the Council of Ministers, while the Victory Coalition expressed its hope that Al-Zarfi’s mandate would reflect the specific needs set by the various blocs, stressing that the transitional phase would be judged on the success of the mandate. This success is linked first and foremost to the achievement of fair elections and the guarantee that a fair and strong government would be in place, free of corruption and the narrow interests of quotas. The Patriotic Union of Kurdistan also welcomed Al-Zarfi’s mandate to form the new Iraqi government, calling it “a constitutional entitlement.”

Despite rejection from some Shiite forces, Al-Zorfi made his first speech to Iraqis, promising them that he would organize free, fair and transparent elections, in cooperation with the representation of the United Nations working in Iraq, within one year after the formation of the government. He also promised to work to confine all arms to the state, to break up all independent armed militias, and ensure rule of law in the country. Pledging to adopt a foreign policy that would remove Iraq from regional and international conflicts, he added that:

“he will do everything necessary to achieve these goals, including protecting protesters and activists, and emphasizing that he would guarantee their right to protest without any more fear of a violent response form the government .”

This was followed by a reception for Al-Zarfi, including the Special Representative of the Secretary-General of the United Nations in Iraq, Jeanine Hennis-Plasschaert, who said that the UN mission would lend its support in creating the new government, and would help to overcome whatever obstacles arose, stressing the importance of providing an atmosphere that would enable the new government to carry out its duties.

Like his predecessor, Al-Zarfi is considered a controversial figure to those activists still protesting in public squares throughout the country: as a politician and parliamentarian, Al Zarfi  has previously held executive positions in Iraq, and he is also a US citizen. The protestors find fault with his prior involvement in politics and his clear ties to the U.S. So while they agree with some of the major political blocs in government that Al Zarfi is not fit to be PM, the reasons behind their rejection is different.

The demonstrators have been clear about their demands since the revolution started last October: to form a government that can efficiently organize early elections, and can hold accountable those who have attacked the protesters, killing hundreds, and injuring tens of thousands. In the public spaces where massive peaceful demonstrations have been taking place, protesters said they reject Al-Zarfi for the same reasons they rejected Allawi, that is, he is not able to satisfy the immediate nor long-term needs of the country. They hung banners in Tahrir Square in central Baghdad expressing this rejection, and just hours after the appointment. Because of a partial suspension of their presence in public squares due to the coronavirus, demonstrators also issued a statement calling for a comprehensive peaceful change through legitimate democratic elections.

“This system,” the statement reads, “which has failed every national test for a decade and a half, whether in relation to security, health or political stability, proves day after day that the Iraqis are justified in calling for peaceful and comprehensive change.” It continues, “Until this moment, this system has failed to offer a positive alternative to the bloodthirsty Prime Minister, Adel Abdul-Mahdi, and has simply reproduced someone of the same character.”

Many activists affirmed over social media their refusal to nominate Al-Zarfi, while some felt hesitant to express their reservations until after the political blocs close to Iran had stated their rejection of him as such a rejection would imply that he would not fulfill their interests.

If accepted, the Al-Zarfi government will succeed the government of Abdul-Mahdi, who resigned under the pressure of unprecedented popular protests, active since last October. Protesters are calling for the departure of the ruling class, an end to corruption and for the improvement of quality of life and guaranteed public services for all Iraqis.

Days of Rage: A Crucial Time for Iraqi Civil Society 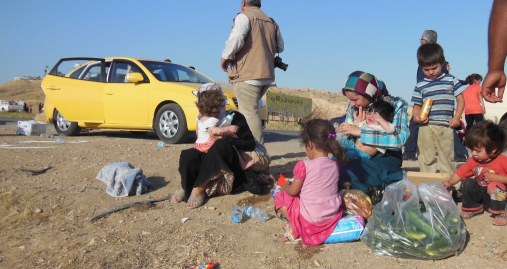