Army forces in charge of Baghdad announced a daily curfew (lasting from midnight to 6am) as thousands of students gathered on the streets of several cities in Iraq. From Baghdad to Basra in the south of the country, demonstrators chanted “No school, no work, until the fall of the regime”. Student protests have been going strong since Thursday, despite warnings from authorities to end them. A recent announcement from the army calls for demonstrators to evacuate the symbolic Tahrir Square in central Baghdad which has been the center of daily protests, and where five demonstrators were killed on 28 October, according to an official source.

Since 1 October, the beginning of the popular movement in Iraq, protestors have been calling for genuine and lasting reform. They are fed up with the lack of basic services, widespread unemployment and the inability of the political authorities to find solutions to the crises so many face in their daily lives. So far, 239 people have been killed and more than 8,000 injured, many of them shot.

“The daily curfew in Baghdad, from midnight until 6 am, will be in place until further notice” an army official stated. The curfew comes after earlier threats to impose “severe sanctions” against those who “obstruct” the continuation of work in schools and government departments.

The protests on Monday had widespread participation of school and university students, who make up 60 percent of Iraq’s population. Many are unemployed and frustrated by a country torn apart by corruption.

Thousands of people took part in demonstrations in cities across Iraq, from Baghdad to Basra. Protests were nonviolent and included sit-ins and other peaceful methods.

On Monday the Central Council of the Iraqi Teachers’ Union announced a 4-day general strike throughout Iraqi schools in solidarity with the protesters.

Unions of various professions, including the lawyers union (which declared a week-long strike) and the engineers union, joined the protests, despite security measures that limited access to areas where protests and demonstrations took place.

“No homeland, no schools!” shouted protesters, voicing their frustrations and concern.

Since 27 October, crowds of school and university students have gathered to take part in demonstrations in Baghdad and other cities, despite a call by the Higher Education Minister, Qusay al-Suhail, to “keep universities away” from the protests.

The number of demonstrators in Tahrir Square has increased, a large part of the square is now filled with tents and places which provide food to protesters and protection from tear gas fired by security forces.


“Mako (no) homeland, Mako Dawam (no schools),” a student told AFP during a demonstration in Tahrir Square.

“I told my mother that I was going to school, but I actually came here,” said a girl with curly hair and a smile on her face.

“We want the parliament to dissolve, to form an interim government, to amend the constitution, and to hold early parliamentary elections under the supervision of the United Nations. We don’t want another solution,” another protester told AFP.

In the meantime, riot police have been deployed around universities to reduce the numbers of demonstrations.


Various cities witnessed mass student demonstrations, stretching from the center to the south of the country, including Kut, Diwaniyah, Nasiriyah, Hilla, Amara, Missan and Basra.

In Diwaniya, two hundred kilometers south of Baghdad, teachers and students from all public and private universities decided to “sit for ten days until the fall of the regime,” according to an AFP correspondent.

“Iran go out, go out , Baghdad remains free,” was heard shouted throughout Baghdad as well.

During the protests, some of which were violent, the headquarters of pro-Islamic parties and other factions were attacked, and some anti-Iranian slogans were chanted.

There is clearly a split on the ground and within the government between pro-Iran and pro-US rapprochement. Depending on whom you talk to, both Tehran and Washington might be seen as key allies of Iraq


Thousands of students took to the streets in Basra, which witnessed similar bloody protests in the summer of 2018 when demonstrators called for better living conditions for the province.

For the first time since the movement began in early October, students from Baquba, the largest city in Diyala province northeast of Baghdad near Iran, joined the protests at the provincial council building, where two members have already resigned in solidarity with the protesters.

These protests are unprecedented in modern Iraqi history. They began as a spontaneous expression of discontentment with the entire political class, including the clerics.

Demonstrations, though initially nonviolent, have also seen violence: 157 people were killed in the first wave (from 1-6 October), and another 82 so far in this second round, which began on the evening of 24 October.

The House of Representatives voted unanimously on Monday, 28 October to form a constitutional amendment committee and to revoke all privileges of senior officials in a bid to quell angry protests against the country’s ruling class.

This session comes a day after an announcement by four Iraqi MPs that they plan to resign from parliament as a way to reject the actions of the political class, which they accuse of “failing” to respond adequately to the demands of the protest movement.

The only two communist MPs, who won their seats in the Sairoun coalition, the largest bloc in the Iraqi parliament led by Muqtada al-Sadr, Raed Fahmi and Haifa al-Amin, as well as Taha AlDefaee and Muzahim Al-Tamimi resigned from the list of “AlNasr” led by former Prime Minister Haider al-Abadi.

The deputies of the Shiite cleric Moqtada al-Sadr began an open sit-in in parliament which will last “until the adoption of all the reforms demanded by the Iraqi people.”

Sadr sent a message Sunday to the Popular Mobilization Forces, the armed factions that fought the Islamic State along with government forces, and called on them not to confront the people and not to “advocate on behalf of those who are corrupt.” Shortly after, a leader of the crowd said his factions were “ready to stand against the sedition that seeks to destroy Iraq and its achievements.”

Since 25 October, dozens of party headquarters and armed factions belonging to the Popular Mobilization Brigade have been set ablaze. A number of demonstrators were shot dead by guards protecting the buildings, or died from asphyxiation or burned during an attempt to set the buildings on fire.

The leaders of those factions vowed to “retaliate” after the killing of one of their members, and the United Nations warned “armed entities” about the dangers of seeking to “impede the stability and unity of Iraq and to undermine the right of people to peaceful assembly and legitimate demands.” 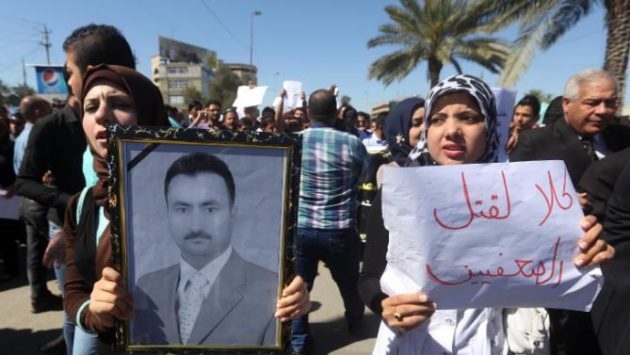 Iraqi Journalists Likely to Face Exponential Rise in Risks in 2015